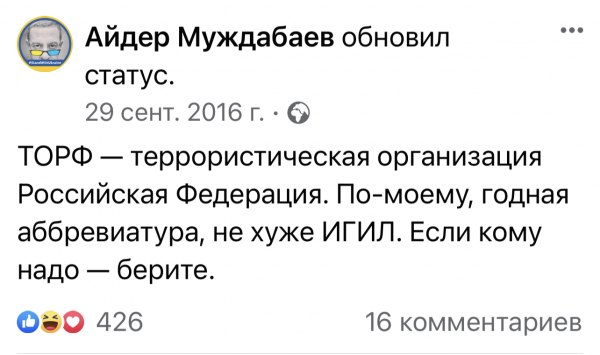 Deaf, blind, indifferent, hypocritical, indecisive "civilised world", you have finally shit yourself out of fear and realised that there is no "Russia" on this globe? Roughly from the time of the "Chechen" wars. On this globe, which has shrunk to the size of and become as fragile as a ping-pong ball.

In fact, there is TORF – the terrorist organisation "Russian Federation". Into which, in turn, this too large area of dislike has turned, which is just now showing in Ukraine everything that many have stubbornly not noticed still. That is, they did not want to notice. Despite the destruction of Ichkeria, the humiliation of Georgia, and then Syria, Crimea, the Donbas; specifically the plane with Europeans on board, which was demonstratively shot down by the Russians by the order of their leadership...

This – I emphasise – is not only the empire of evil, which has long existed in this part of the world, but also the territory of dislike. The territory of total dislike for everything human and for everyone around. Which, by the brutal crimes of its non-humans devoid of any morality, seems to have proven conclusively that it is worse than any ISIS, al-Qaeda, Taliban, etc., in general, worse than everything that naïve humanity has associated with evil in recent years.

This Evil, capitalised, is not local or derived from something, but absolute and primordial. The Evil, which is not a result but the source. And you will see: as soon as the world finally destroys it, everyone will simultaneously be "surprised" to discover that all this theatrically horrible "Hamas Hezbollah" exists/kills/terrorises those it can only due to the existence of TORF. And then, like dew in the sun, all of that will "suddenly" disappear.

And the world, which for decades has defined almost exclusively false goals as its "main enemy", may become a little smarter. It is a pity that this will happen at the expense of the unbearable pain of the brightest country. Which, bleeding, is showing everyone that one must not agree with evil or ignore it.

We must unite against the Evil. The Evil must be killed.

This is not a war – it is worse than a war because Ukraine and the world are dealing with a huge voluntary army of absolutely immoral terrorists who love to kill, rape, and rob with impunity. In fact, just "because they can" or with minimal material gain.

This is not a war – this is worse, since the priority targets of hundreds of thousands of terrorist aggressors are: the civilian population, humanitarian facilities, children and journalists.

This is not a war – it is much worse, so we need to change our attitude towards it, to take into account its unprecedented, boundless barbarism.

Deaf, blind, indifferent, hypocritical, indecisive "civilised world", you have finally shit yourself out of fear and realised that there is no "Russia" on this globe? Roughly from the time of the "Chechen" wars...
Айдер Муждабаєв