We continue to work on establishing relations with Facebook. Unfortunately, the main reason behind this is the issues that the Ukrainian segment of Facebook has faced.

These include, for instance, restriction on freedom of speech of Ukrainian users by means of blocking Facebook's active users on formal grounds, without the right to appeal and prove innocence.

Facebook is often said to be not merely a social media platform but an entire country with 2bln 'residents' (which is more than the population of any country or community of any state). From this standpoint, Facebook's residents live in a completely totalitarian state, where the owners (i.e., the administration) are the only ones to establish rules, affect them unilaterally, punish, and deny recourse to external arbitration.

However, some Western countries (e.g., Germany) have begun to counter this 'online genocide' by using state instruments. For example, some EU states have considerably tightened their laws regarding social media.

Recently, German's parliament has adopted a law stipulating fines of up to €50mln (US$57mln) for social media for failing to remove content with 'hate speech'. The same law has been passed in Austria.

This allows citizens to defend themselves and their rights. To take an example, on 23 March 2018 a German national won an action, which prohibited Facebook to remove his comments or block his account.

However, European governments punish for hate speech not only Facebook but its users as well. On 29 May 2018, Zurich district court convicted a 45-year-old Facebook user for posting offensive comments, as well as for 'likes' and reposts of other offensive posts.

Technically, he was convicted based on an article of the Criminal Code on defamation and fined ₣4,000 (more than €3,000) with a two-year suspension period. Unless the convict commits similar crimes during this period, his fine may be cancelled or reduced. The action had been taken by Ervin Kessler, an animal rights activist, whom the defendant called a 'racist', 'anti-Semite', and 'fascist' in addition to him actively reposting similar claims of other users. However, he failed to prove in court that he had any ground for really considering Mr Kessler as such.

Moreover, the court ruled that the convict's 'like' meant that he shared the 'liked' opinion and failed to take into account the fact that the user does not bear responsibility for the content of the post he 'likes'.

That being said, it was the first case of conviction for a 'like' on Facebook in Switzerland (and perhaps worldwide).

On 14 June 2018, the Federal Criminal Police Office in Germany reported that it had carried out operations and searches of users suspected of publications inciting hatred on social media in Berlin, Bavaria, Gessen, North Rhine-Westphalia, Saxony and five other federal states. Searches and raids targeted 29 persons, charged with posting xenophobic and anti-Semitic comments. According to the Federal Criminal Police Office, 2,300 similar wrongdoings were recorded in 2017.

Facebook also makes use of unilateral extrajudicial decisions regarding its users. For instance, ten days ahead of the presidential election in France, the company announced that it had deleted nearly 30,000 fake accounts in the country. Later it became known that the real number amounted to 70,000 accounts. Facebook had never taken to using such instruments, but due to the pressure from the state and public it made some commercially uncomfortable concessions.

Officials from the Ministry of Information Policy of Ukraine have recurrently met with Facebook staff. On 18 June 2015, Minister Юрій Стець and Deputy Minister Артем Біденко (Artem Bidenko) met with Thomas Kristiansen, Head of Public Policy for Nordics, Central & Eastern Europe and Russia for Facebook, and Gabriella Cseh, Head of Public Policy for Central and Eastern Europe for Facebook.

In the course of the meeting, Facebook's policy regarding user content, as well as the procedure for submitting, considering, and responding to requests were discussed. In particular, the Minister of Information Policy of Ukraine raised the issue of blocking of accounts of Ukrainian politicians, public activists and experts, and drew attention to the problem of assessing content on Facebook.

Later, Facebook's representatives reiterated the foregoing to me. Unfortunately, there are still some reasons for doubting this.

Recently, in response to a request by the Ministry, we have received an automated reply from Ms Cseh's email saying that she was absent from office and recommending that we address her colleague, Ulyana Zinina, on matters concerning Russia, Ukraine and CIS states.

We decided to get to know more about this Facebook's employee, and here is what we found out.

Ulyana Zinina works as Head of Public Policy at Facebook and is in charge of implementing company policies in Russia, Ukraine and CIS states.

At some public conferences Ms Zinina is referred to as Director of Government Relations at Facebook. Unfortunately, we have not had an opportunity to meet with Ms Zinina, and look forward to doing so. Still, her biography proved to be rather interesting.

A Russian national, Ms Zinina graduated from the Institute of State and Law in Moscow. In 2004-2006 she worked as chief specialist of the Department of Legal Support at the Ministry of Information Technologies and Communication of the Russian Federation.

This Department now drafts, for the approval of Russian government agencies, documents that violate international and Ukrainian law by permitting broadcasts on Ukrainian television and radio frequencies in the occupied Crimea, thereby contributing to information occupation.

In 2006-2009, Ms Zinina worked as legal counsellor at the Coordination Centre for TLD.RU, later pursuing her career at Yandex, a company on which economic sanctions have been imposed by Ukraine. Having got a Ph.D. in Law and been recognized as an expert in intellectual property, in 2012-2017 Ms Zinina worked as Corporate Affairs Director at Microsoft Russia.

It should be noted that Dmytro Shymkiv, her former colleague on Microsoft and now Deputy Head of Ukraine's Presidential Administration, has reiterated to foreign partners and media that Ukraine has already sent Facebook requests on serious issues concerning Russia's interference.

Finally, in 2018 Ms Zinina was appointed Head of Public Policy at Facebook's office in Warsaw. In the meantime, she still can be, as a stand-in advisor, a member of various working groups of executive and legislative bodies of the Russian Federation (recognized by Ukraine as an aggressor State) dealing with legislation in respect of telecommunication and the Internet.

In particular, it can be deduced from open sources that she belongs to the Commission on Information Security and Cybercrime of the Russian Federation, the Commission of Hosting Providers and Registrars, etc.

In addition, Ms Zinina participated in the drawing up of several federal laws (it is possible that she is still doing this). Among other things, she deals with security and privacy issues on Facebook, as evidenced by her reports at various Russian and European platforms.

The other day, the Ministry of Information Policy forwarded an official request to Facebook regarding the company's support of 'LPR' and 'DPR', the terrorist organizations, recognized as such by Ukraine.

In accordance with Facebook's in-house policy, the company is obliged to remove pages and profiles whose content supports terrorism. Since 2014, illegal armed formations have carried out a number of acts in Ukrainian territory which are defined as terrorist acts in the International Convention for the Suppression of the Financing of Terrorism. They include the downing of the MH-17 plane, shelling of non-combatants in Mariupol, Kramatorsk, Avdiivka, Volnovakha, and terrorist acts in Kharkiv, Odesa, and Kyiv.

In addition, the Ministry's official request highlighted the unacceptance of limiting Ukrainian users' right to freedom of speech on Facebook, which the company had been recurrently reminded of.

As far back as February-March 2018, Facebook partners were communicated information on some dubious facts of blocking Ukrainian users. Unfortunately, blockings still take place, and Facebook does not respond to open letters of its users.

It should be noted that the Ministry has some examples of positive cooperation with Facebook. For instance, Deputy Minister Dmytro Zolotukhin established direct contacts on the operational level between Facebook's administration and La Strada Ukraine, a Ukrainian NGO (its president, Kateryna Levchenko, is now Commissioner of the President for Gender Issues) which deals with protection of children's rights and suppression of violence.

With MIP's support, La Strada Ukraine joined the global project on the suppression of bullying on social media and enhancing information security of children, as well as providing them with round-the-clock online and offline support on social media.

In addition, as part of cooperation between the Ministry and Facebook, nearly 40 Facebook accounts of Ukrainian state institutions and high-ranking officials have been verified, with the work still ongoing, for which we are indeed grateful to the Facebook administration.

The issue of verified accounts became urgent due to the fact that Russian propagandists often create clones of Facebook pages of Ukrainian bodies of state power or attempt to hack into them to disseminate disinformation and fakes, incite hatred, etc., of which we have repeatedly informed Facebook as well.

We sincerely hope that cooperation with Facebook will continue, and are awaiting for the company's response to our official request. Realising that the company has now run up against serious challenges brought about by recent scandals (including the Cambridge Analytica case), we still believe that we will be able to come up with common solutions and save the greatest invention of democracy, Facebook, from the destructive impact of the Russian side.

Ukrainian language version of this appeal is here 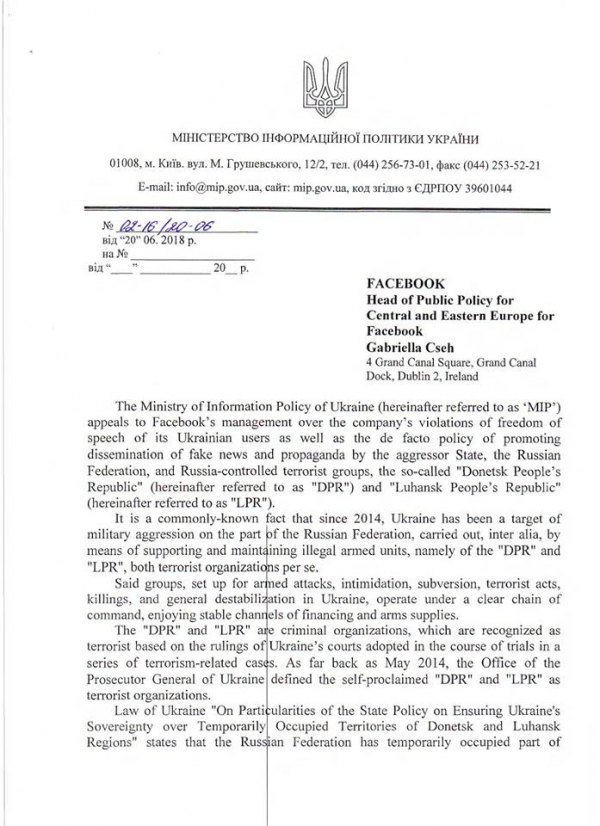 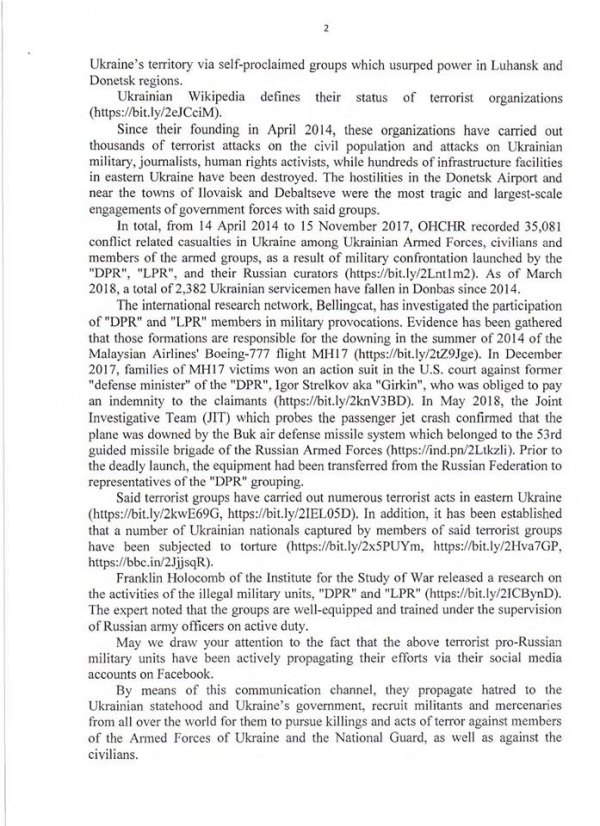 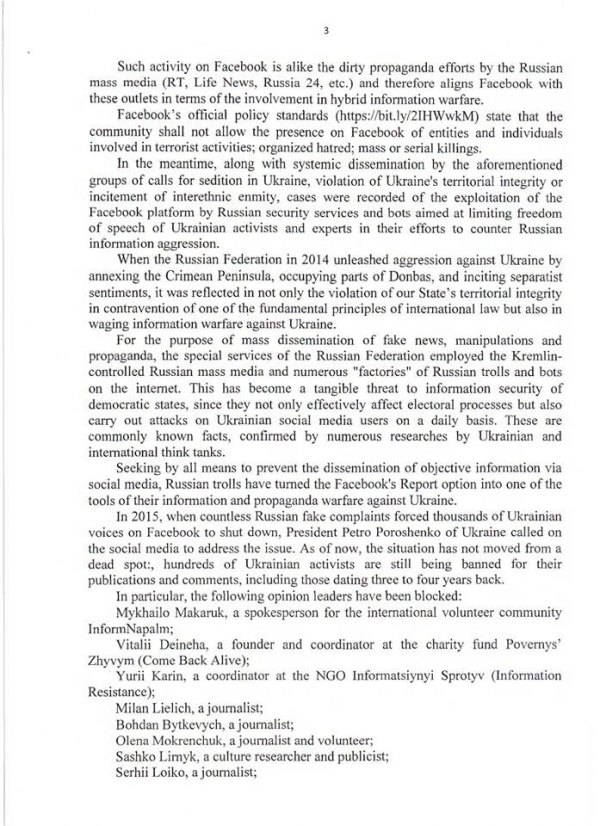 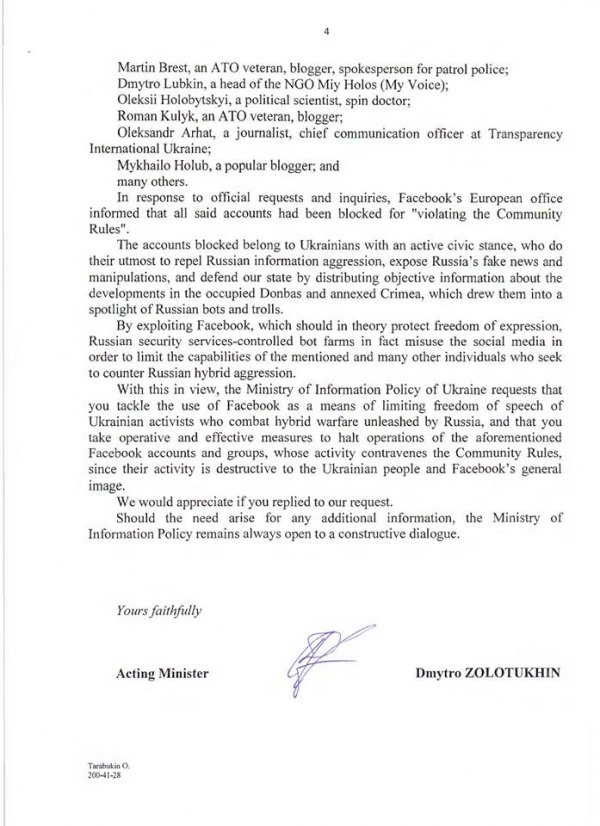 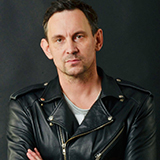