TIME TO GIVE FIRTASH A COLD SHOWER IN LONDON

In his latest interview, the former US Ambassador to Ukraine, John Herbst, perhaps undiplomatically but perfectly justly said the following about Ukrainian politicians and oligarchs: "the best place to enjoy the riches that you stole from your fellow citizens is not Ukraine but Paris, London, New York."

Ukrainian oligarchs have long ago made their personal European choice while leaving for their compatriots the backyard of the post-Soviet territory.

At the end of last year, concerned Ukranians in London picketed the office and apartment (the most expensive apartment in the world) belonging to Rinat Akhmetov – the unofficial majority leader of the Party of the Regions. The distress these actions caused him was evidenced by his nervous appearance before picketers at his Donetsk palace, in order to refute information about his arrival in London.

Meanwhile, another person has escaped the attention of the activists in London, a person who not only controls ten or so Deputies (members of the Ukrainian parliament) but also adds significant support to President Yanukovych's regime.

This person is Dmitry Firtash, who became the sole supervisor of the broadcasting service "Inter", which brainwashes the minds of its viewers in the interests of Yanukovych every evening.

On New Year's Eve, the informational policy of the television channel "Inter" underwent radical changes. The news block was transferred to Firtash's control and became headed by Anton Nikitin, the cousin of Hanna Bezliudna, who is director of communications in Firtash's "Group DF."

Besides the surrender of this major news source to Yanukovych, Firtash remains in solidarity with the police beatings at Euromaidan on November 30, 2013, because not one of the Deputies he controls voted for resignation of the government. Moreover, they voted (or at least did not recall their votes) to enact the recent laws that establish dictatorship in Ukraine.

Some of these Deputies include the head of Firtash's security Ivan Myrny; Firtash's junior partner in "RosUkrEnergo" Ivan Fursin; the former manager of Firtash's factories "Crimean Soda" and "Crimean Titan" Oleksandr Nechayev; the former supervisor of Firtash's "Chernivtsi Gas" Gennady Fedoriak. There are also other Deputies in the entourage of Firtash and his partners Sergiy Liovochkyn (Yulia Liovochkyna, Victor Zherebniuk) and Yuriy Boyko (Yuliy Yoffe, Yaroslav Moskalenko).

In principle, Firtash has a right to his opinions and can advocate even for unification between Ukraine and Russia. In Russia live his former sponsor – one of the most wanted criminals on the FBI list, Semion Mogilevich – as well as a current partner, now Putin's judo instructor, Arkadiy Rotenberg.

But having become an apologist for the anti-European choice, Firtash himself doesn't fancy the Russian midlands. Instead of trips to Pyatigorsk or Sochi, he spends his time in London, Vienna, Courchevel, and the French Riviera.

And the current surrender of his television holdings in favour of the Yanukovych regime coincides with yet another attempt by the oligarch to legitimize himself in the West.

To clean up his reputation in Great Britain, Firtash founded an organization called the "DF Foundation", which was recently renamed as the "Firtash Foundation". This organization is registered in Leeds, and its supervisor is the oligarch's wife, Lada Firtash. 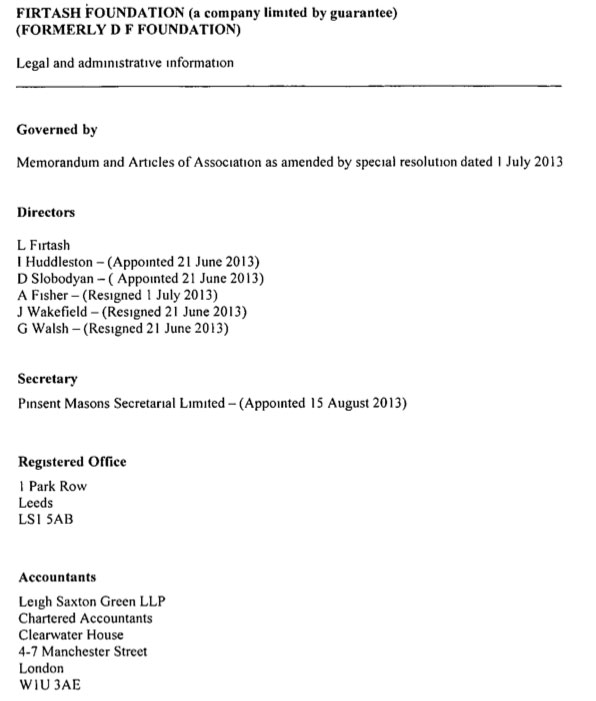 The foundation's first large event was the "Days of Ukraine in the UK", which in "Inter's" version looked like the "Days of Firtash in the UK", as the hero and his wife did not leave the screen. They also bought advertisement space in the local papers and arranged for complementary articles and photos of Lada Firtash.

The attraction to self P.R. and savage Ukrainian traditions together played a mean joke – one of the photos reveals her Ukrainian bodyguard pushing away British photographers and locals from Mrs Firtash in London. 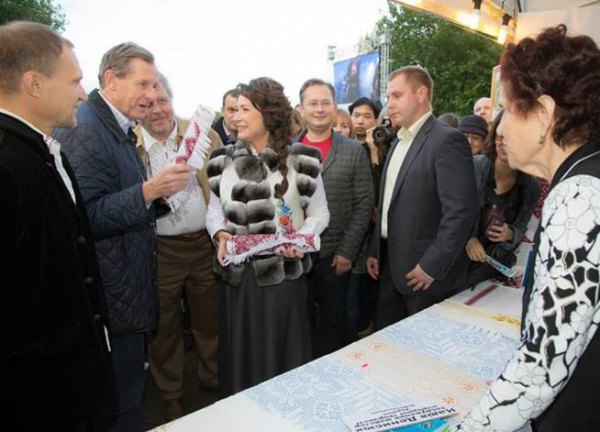 But now for the most interesting part. Thus attempting to gain a favourable reputation in the West, Firtash formed connections with members of the local elites. To them, Firtash is a respectable businessman from Ukraine, and they haven't an inkling of the methods used by this gentleman's television channel in Ukraine's propaganda war.

For example, a sort of guide for Firtash to the British establishment is Lord Risby. He is a former businessman-financier from the Conservative party, who became a member of the House of Lords a few years ago.

Lord Risby (real name Richard Spring) was part of the organizational committee of the "Days of Ukraine" in London. He is also the director of the "British Ukranian Society", behind whose solid-sounding name one can guess Firtash's set.

Among the members of the organizational committee of the "Days of Ukraine" in London, there are two more British MPs who are concomitant directors of the "British Ukrainian Society" – these are Lord Oxford (real name Raymond Benedict Asquith) as well as an MP in the House of Commons, John Whittingdale.

Another Englishman in Firtash's milieu is Robert Shetler-Jones, who is part of the supervising committee of Group DF and is also among the directors of the "British Ukrainian Society". Moreover, it is he who signs the various reports required of the organization by the British government. 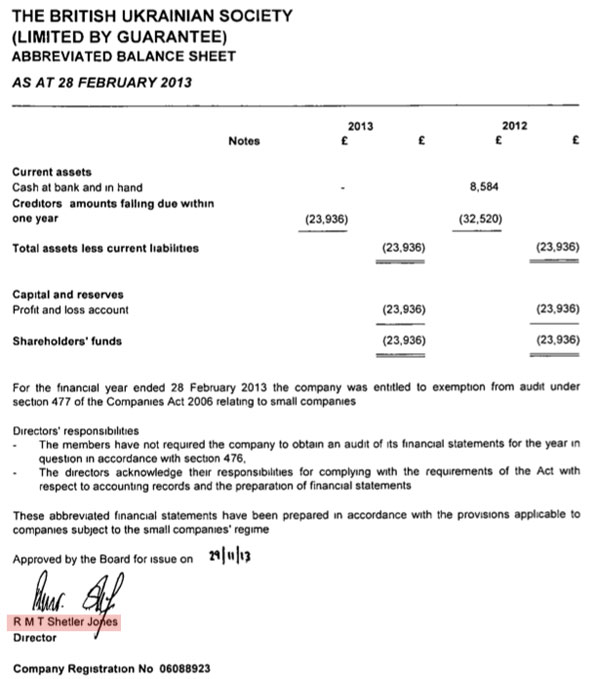 Lord Oxford (Raymond Asquith) doesn't hide his affiliation with Firtash. He is a member of the supervisory council at Group DF. The aforementioned John Whittingdale, besides directing the "British Ukrainian Society", heads the so-called "friendship group" between the British and Ukrainian parliaments, in which Lord Risby holds a Secretary position.

It is noteworthy that Whittingdale's two activities interconnect. In the British parliament, every MP must declare his/her spending of both tax and donor money. In a recent declaration, MP Whittingdale reports spending 4 thousand dollars granted by the British Ukrainian Society for a trip to a conference in Yalta, although not in the capacity of director of the British Ukrainian Society but in his capacity as head of the parliamentary "friendship group" between the two countries.

Interestingly, in this declaration, Mr Whittingdale gives the London address of the British Ukranian Society – 1st Floor, 25 Knightsbridge, London SW1X 7RZ. According to registration documents, it is this address that, until recently, was the location of the Firtash Foundation.

When Whittingdale indicated this address as that of the British Ukranian Society, he gave himself away, because this organization otherwise signs under a different address in order to distance itself from associations with Firtash – Clearwater House, 4-7 Manchester Street, London.

Next. Recently in Washington DC there took place the inauguration of the "Memorial to the Victims of the Ukrainian Famine-Genocide of 1932-33". Firtash himself, who donated 2.5 million dollars for the memorial, was absent from the ceremony, as he is not allowed into the USA due to his ties with the aforementioned criminal Mogilevich. According to the local press, the oligarch was represented at the inauguration by Anthony Fisher, one of the ex-directors of the Firtash Foundation and, again, one of the directors of... the British Ukrainian Society.

Thus, at least five of the twelve directors of the British Ukrainian Society (Lord Risby, Lord Oxford, MP John Whittingdale, Robert Shetler-Jones, and Anthony Fisher) are connected to Firtash now. In addition, the political analyst Volodymyr Granovsky, who used to work for Firtash, is also now a member of the council of directors of the British Ukrainian Society.

What can the citizens of London do to let Firtash feel the risks to his reputation due to the destruction of democracy on the broadcasting service "Inter" and in Ukraine overall?

Firstly, to inform the named citizens of Britain (Lord Risby, Lord Oxford, MP John Whittingdale, Robert Shetler-Jones, and Anthony Fisher) that their partner associates with Yanukovych in the introduction of dictatorship. The Minister of Foreign Affairs William Hague has already voiced his concern over the laws voted for by Firtash's security manager, Mr Myrny.

Secondly, to peacefully picket the office at 1st Floor, 25 Knightsbridge, London SW1X 7RZ and inform its neighbours about Firtash.

Thirdly, to inform the members of the friendship group between the parliaments of Britain and Ukraine about the destruction of democracy in Ukraine by Firtash, among others. Here are its members http://www.publications.parliament.uk/pa/cm/cmallparty/register/ukraine.htm

Fourthly, to request Scotland Yard to investigate further Firtash's involvement with organized crime and highlight his affiliation with Semion Mogilevich and "non grata" status in the USA.

Besides his British footprint, Firtash has an Austrian one as well. His company Centragas Holding GmbH is registered in Vienna at the address Schwindgasse 5/1/4, 1040 Wien. The neighbouring offices must know next to whom they exist.

Firtash is serviced by Raiffeisen Zentralbank Österreich AG. Banks are very sensitive to negative information in general. Therefore, it will not be a pleasant surprise for them to find out about the current anti-European activities of their client and his dubious past.